Carl Benz submitted a patent on January 29, 1886, to Berlin’s Imperial Patent Office for a gasoline powered three wheel machine.  Patent number 37435 is expressed as the first automobile to have an internal combustion engine with an electric ignition system.  The single cylinder 954cc, four-stroke engine was tested and produced 0.9hp at 400rpmby the Technical University of Stuttgart.

In 1888, Bertha Benz borrowed her husband’s car to take it on the first long distance trip with their two sons, Eugen and Richard.  Carl refrained from taking long jaunts.

Petrol used at the time was a solvent known as Ligroin. 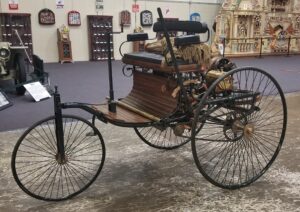