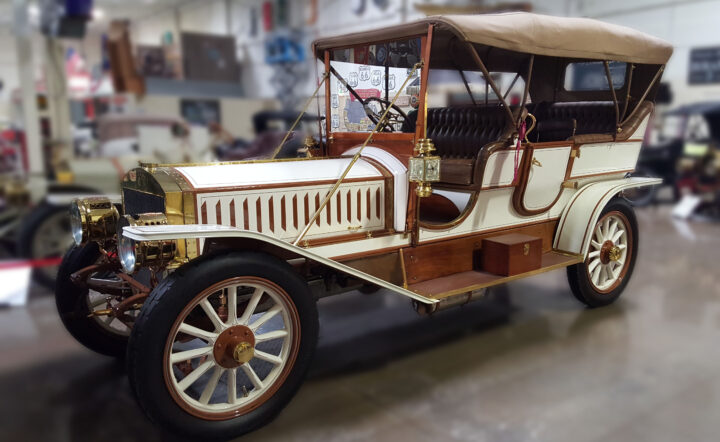 Walter Austin, the son of  lumber baron James E. Austin, started the Austin Automobile Company in 1903 in Grand Rapids, Michigan.  The first Austin had been a big, tw0-cylinder vehicle on a 90″ wheelbase, and the car became bigger and more powerful with each passing year.  Not interested in mass production, the company produced a total of 575 cars from 1903-1920.  Celebrity owners included publisher William Randolph Hearst and boxing star Jack Johnson.

This Model 60 was displayed at the 1909 Chicago Auto Show and was bought off the floor for $5,000 by a Charles Herbst of Lima, Ohio.  The Herbst family sold the car in 1946 to Detroit trucking tycoon Barney Pollard, one of the earliest true car collectors.  Pollard entered the Austin in the Glidden Tours in 1947 and 1953.  It was later displayed at the Crawford Museum in Cleveland, Ohio for 30 years.  This impressive, brass era car was restored in 2003 by its third owner, but is nearly pristine, having never been dismantled.

Other than the dashboard, all parts of the car are original.