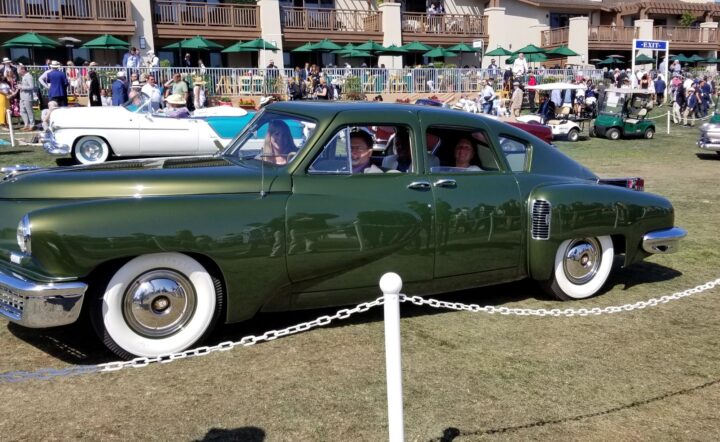 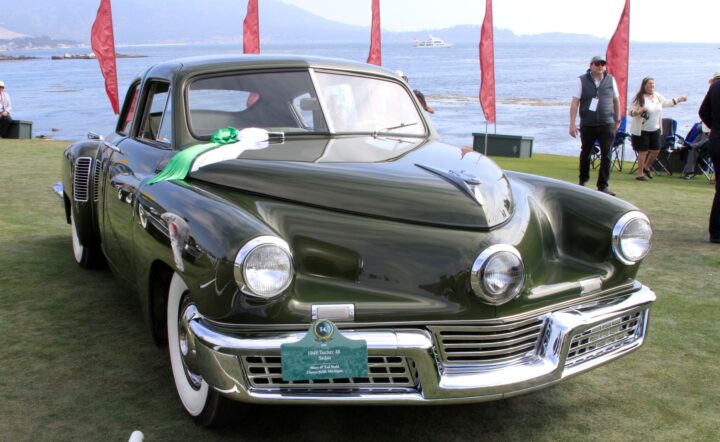 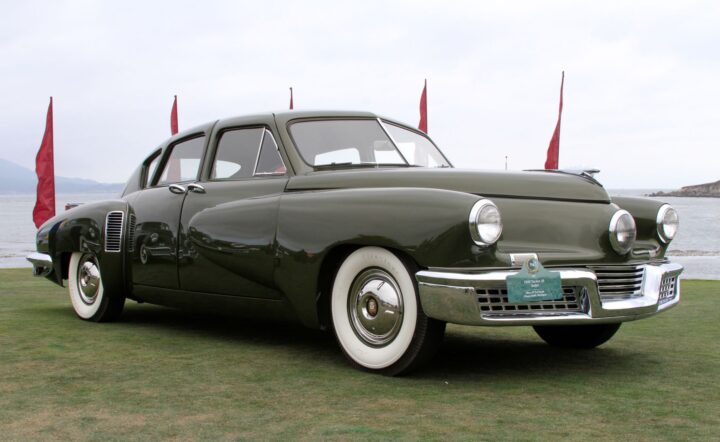 Preston Tucker (1903-1956) was an entrepreneur and car designer. Early in life he had been an office boy at Cadillac Motors, ran a gas station, was a policeman, and settled into a sales career with many car dealerships, selling Stutz, Chrysler, Piece-Arrow, and Dodge cars. His fascination with racing led to a partnership with famed race car engineer Harry Miller in Indianapolis.

In 1939, sensing an opportunity in the coming war in Europe, Tucker designed and built a prototype armored combat car at the request of the Dutch government. The car was far faster than the design requirement and the Dutch government declined to continue with the project. It did feature a unique gun turret, which attracted the attention of the U.S Navy. Tucker was soon in production of these turrets for use in ships and aircraft.

As the war ended there was a pent-up demand for new cars, Tucker realized his dream of starting his own car company, offering a car very different from the warmed-over pre-war designs of established car companies. Tucker was a salesman, and had a lot of interesting, highly advanced ideas that his small organization with tenuous funding had no realistic hope of producing. The 1948 Tucker sedan did manage to feature many of his more reasonable, achievable ideas; a safety frame that deflected from a collision rather than absorb the force and also protected passengers in a side impact, a powerful rear engine adapted from a helicopter power plant that could propel the car to 100 mph with ease. The front passenger area was designed to be a “crash zone” that passengers could climb into if a crash was imminent, a roll bar built into the roof, and a laminated windshield was designed to pop out in a collision.

In July of 1946 Tucker leased the former Dodge Chicago Aircraft Plant from the U.S. Government’s War Assets Administration and began to slowly acquire the needed equipment for auto production, as funds allowed. Tucker’s methods of finance and raising capital were unorthodox, and soon raised the ire of the Securities and Exchange Commission, resulting in a trial that halted the rudimentary production that Tucker had set up in an effort to satisfy investors, creditors and the 1,800+ dealerships that had been sold. The trial dragged on, and when the trial ended in January of 1950 Tucker was exonerated, but it was too late. Tucker’s remaining funds were spent fighting the trial, the War Assets Administration took back the factory, and there were numerous lawsuits by dealers who never saw a car, let alone sold one.

Just 51 of the Tucker sedans were produced before the company was forced to halt production, of those 51, 47 survive today, and are considered one of the rarest and most desirable collector cars today. The example seen here was purchased by the Stahls Foundation in 2008 from a museum in Stone Mountain Georgia. It was completely restored by Classic and Exotic Service in Troy Michigan and is considered to be the best example of a Tucker sedan today. In 1987 famed director Francis Ford Coppola, himself a Tucker collector made a movie of the Tucker Story, “Tucker, the man and his dream”. This car was one of 22 Tuckers assembled for the production of this movie.